I am so excited to share with you my interview with Diana Paul. Her book, Things Unsaid, released in 2015 by She Writes Press, explores the dynamics and emotional landscape of caring for elderly parents, while trying to navigate life’s other plans. 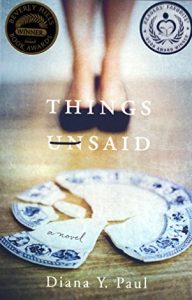 My debut novel, Things Unsaid, was released exactly three years ago and focuses on the sandwich generation:  what to do with aging parents who are driving you crazy?  Conversely, for the elderly, will their adult children be willing to contribute to their caregiving financially, emotionally, and physically? This could be about anyone’s family.

Inspired by a true story – Jules Foster, a Stanford child psychologist, after hearing news of her estranged, narcissistic mother’s terminal diagnosis, chooses to care for her mother over her own addicted daughter.

I have two novels in the pipeline–one is a rom-com about online dating .  The other is a mystery that continues where my debut novel, Things Unsaid,  leaves off, turning an ambiguous subplot into a possible murder.

Stay with your dream of being a writer, even if that means only writing for yourself.  My advice would draw attention to the fact that you will be  surprised by how much you enjoy meeting others along the way in your writing/reading adventure.

I have always been a scribbler and writer, from elementary school on.  I wrote stories for the school and college newspapers, academic books on Buddhism (my graduate school specialty), and then finally turned my energies to fiction.

All the characters, of course, have part of my psyche but my favorites are the protagonist, Jules Foster, who is deeply flawed, and her daughter, Zoe, who has to contend with her own crisis.  I had fun with Courtney in the online dating novel as well.  She’s hilarious and also vulnerable.

If the weather is nice, I like to write on the deck with my laptop.  Otherwise, at my desk.

Almost everyone has a story, and I love hearing what others have experienced. Sometimes, I will even record what a friend says with her/his permission, of course.  Movies and television series also have great writing. The structure and character arcs of the best screenwriting never cease to inspire my own writing.

That I meditate every day as a way to bring a clear mind to the writing process and to unwind and let thoughts just surface.

I usually start with an outline, so that makes me a “mini-plotter”. But the story and characters evolve in a way that surprises me so I become a “pantser” as well.

I haven’t read mysteries in a very long time, but since I’ve just finished the manuscript for one, I decided to pick up the genre again.   I’m enjoying reading The Suspect by John Lescroart, featuring a female attorney as the protagonist.

I’d either sketch or paint with Jules, the protagonist in Things Unsaid.  Or, I’d attend university classes with her daughter, Zoe.

I always thought that Kate Winslet, Reese Witherspoon, or Naomi Watts would make a great Jules Foster who is on the cusp of fifty years old.  For the narcissistic matriarch I would go for Meryl Streep, Glenn Close, or Melissa Leo.  I kept these actors in mind when working on Things Unsaid.

A Japanese Lover by Isabel Allende,  Mrs. Bridge by Evan S. Connell, and A Thousand Splendid Suns by Khaled Hosseini.

I meditate, then I review the previous day’s work.  And I also have to deal with our cat, Mao, jumping on the keyboard of my laptop. 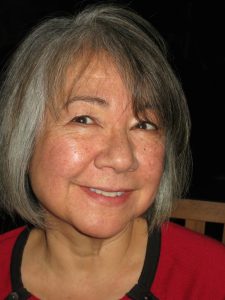 Diana Y. Paul was born in Akron, Ohio andhas a Ph.D. in Buddhist Studies from the University of Wisconsin-Madison and has a B.A. in both psychology and philosophy from  Northwestern University.  Diana is a former Stanford professor in Buddhism with a focus on the role of women.

Diana is also the author of three books on Buddhism, one of which has been translated into Japanese and German.  Her short stories have appeared in a number of literary journals. She lives in Carmel, CA with her husband and calico cat. Her  second novel, A Perfect Match, is  pending as well as a third, Deeds Undone, a mystery which continues the narrative in Things Unsaid. When not writing, Diana  creates mixed media art.  Her art has been in museums and galleries in California, Hawaii, and Japan.

Family is never easy to deal with, elderly family is even more so.  Jules, a former university professor, has always played “the good daughter.” She and her husband Mike have set aside a college fund for their daughter Zoë, who is preparing to leave for Stanford. But when Jules’ parents lose everything in 2008’s Great Recession, she must make an impossible choice: her daughter’s future or her dying parents.

“With a grace that is absorbing and deft, Paul tackles many difficult questions, including filial responsibility, depression, marital strife, and sexual identity. …The author depicts heart-wrenching conundrums as the three siblings are forced repeatedly to evaluate their personal priorities….An engaging tale of family dysfunction and intractable senior citizens.” ~Kirkus Review