Ready for a murder mystery?

Today I am interviewing a fellow New Mexican, Alexa Padgett, whose novel, A Pilgrimage to Death, was released August 14, 2018, with Sidecar Press LLC. Here is a little bit about Alexa:

With a degree in international marketing and a varied career path that includes content management for a web firm, marketing direction for a high-profile sports agency, and a two-year stint with a renowned literary agency, award-winning author Alexa Padgett has returned to her first love: writing fiction.Alexa spent a good part of her youth traveling. From Budapest to Belize, Calgary to Coober Pedy, she soaked in the myriad smells, sounds, and feels of these gorgeous places, wishing she could live in them all–at least for a while. And she does in her books.She lives in New Mexico with her husband, children, and Great Pyrenees pup, Ash. When not writing, schlepping, or volunteering, she can be found in her tiny kitchen, channeling her inner Barefoot Contessa.

Alexa, what was/is your latest book release? Tell us about it!

A Pilgrimage to Death is a murder mystery. The novel released August 14, 2018. This book’s protagonist is a Harley-driving, potty-mouthed reverend whose identical twin sister was murdered a year ago. The book opens with Cici and her hiking buddy, Sam, finding the body of one of her parishioners in the Santa Fe National Forest…with stab wounds reminiscent of her sister’s. As she’s pulled into the investigation, Cici discovers her sister was on the trail of a deep-rooted criminal operation, and her death was no random act of violence.

I’m finishing the edits to book two in this series, A Heritage of Death. It releases October 23, 2018.

Take more risks. Write even when you don’t feel like it and even when what you think you’re writing is total crap. Get in the habit and be open to new ideas and methods. Never stop learning. A bit cliché, huh? But still advice I wish I’d followed.

When I was seven, I read L.M. Montgomery’s Anne of Green Gables. That year, my teacher had a “reading tub.” She claimed it a special treat to snuggle into the heaps of pillows and read there—I believed her and spent many hours with Anne in that cracked, white porcelain palace. I’ve been hooked on novels since, though I tended toward genre fiction: fantasy, mysteries, thrillers, and romance. In fourth grade, my friend Ginger used to come over, and we’d write fantasies based on Narnia and Lord of The Rings. In some form, I’ve been writing since then.

I find this questions hard to answer! I adore many characters, but here are a few that come to mind quickly. I love Inspector Poirot in Agatha Christie’s cozy mysteries. I adore Claire in Diana Gabaldon’s The Highlander. I chuckle at Nuala Anne McGrail’s antics in Andrew M. Greeley’s series.

Oh—this is pitiful. I have a desk and a lovely chair in my office, but I prefer to write with my laptop on my lap while I sit on the couch.

That’s changed over time. Now, I find I’m more drawn to ideas that hold themes and emotion. Sometimes it’s a news story or a person I hear about—other times, I’ll go for a walk, my brain will be doing its thing and voila! Inspiration!

I was the English nerd…who never actually took an English course in college. I adored some of the assigned readings in high school and college, like The Scarlet Letter, The Stranger, and Madame Bovary, but my favorites were The Remains of the Day, Memoirs of a Geisha, and Catcher in the Rye. I’m sure it helps that I’ve participated in a book club for years—since right out of college, really, and many of my close friends are voracious readers. I worked as a literary agent where I learned to broaden my scope and enjoy a vast array of excellent works. I’ve always been a fan of a beautifully-crafted phrase or a quixotic project that just works.

I like to have a basic idea of the book I’m developing. Though, in completing a book earlier this year, I ended up tossing the outline and starting over—for the third time—because my brain finally latched onto the right story thread for that novel.

I’m listening to Good Omens by Terry Pratchett and Neil Gaiman. I love the quirky humor that abounds throughout this novel.

Tough one! I like most of my characters and enjoy spending time with them on the page. But…in real life? I’d have to say the spy we meet in An Artifact of Death(that’s book 3 in my Reverend Cici Gurule Mystery series). He fascinates me. He’s such a debonair man-of-the-city, but he’s adaptable enough to handle a mountain lion and a flash flood. I think I should like to spend the day in Charleston (because I’ve been wanting to go for years!), learning about the city and maybe catching an international operative during a jewel heist. I do have a purple belt in Kenpo, so I’d like to think I’d be helpful.

Oh, tough one! Maybe Morena Baccarin or Salma Hayek because they’re both so talented and look somewhat like I imagine Cici to look. Or dreaming really big (one of my favorite actors), Anne Hathaway.

Here is more about A Pilgrimage to Death: 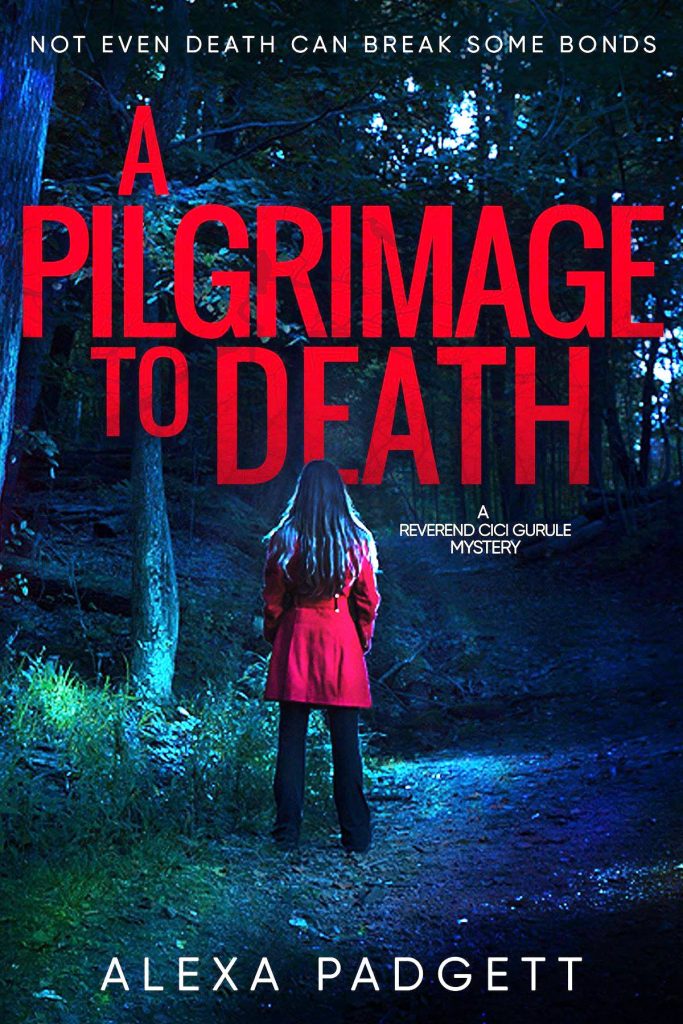 They murdered her sister. They threatened her church. Now, the day of reckoning will cost her everything…When Cici Gurule finds the dead body of a parishioner in the nearby Santa Fe National Forest, she’s horrified to realize the victim bears the same stab wounds that ended her twin sister’s life one year earlier.Now, as a freewheeling, progressive reverend who’ll stop at nothing to protect her flock, she’ll need to join forces with her detective friend and a loyal pair of Great Pyrenees to hunt down the killer before she’s forced to officiate another funeral.Soon, however, Cici discovers her sister was on the trail of a deep-rooted criminal operation, and her death was no random act of violence.With the criminals out for Cici’s blood, she needs to catch the wolf by the tail…before it goes in for the kill.

You can buy her novel here: